Beer Ads Promise Proprietary Tech to Get Booze Into Your Face!

You are here:
May 12, 2011Leave a commentSocial TV and TrendingBy Phil Tapia

Beer ads are more than just competitive, you can consider it all out war! To convince drinkers it’s the coldest beer in town, Coors Light has for a while made a big fuss over its “cold-activated” cans and bottles on which special thermochromatic ink turns the mountains blue when the beer is sufficiently chilled. Anheuser-Busch followed up recently with its new “ice-cold easy indicator” for Busch Light. And then, this year MillerCoors upped the ante with its new “super-cold” indicator, in which a bar on Coors Light turns blue when the beer reaches a near-frozen state. 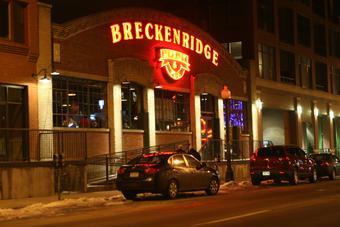 Whatever happened to just touching the damn beer?
This novel concept is put forth in a new ad campaign by a small brewer in Colorado. In one spot, Breckenridge Brewery reveals its “proprietary cold test,” which consists of head brewer Bob Harrington touching a bottle of Summerbright Ale and deadpanning: “It’s cold.” Another spot plugs Avalanche Ale’s “gravity activated pouring” bottles: “When you tip it, beer goes straight in your mouth. When you tip it back, the beer stops flowing.” Without saying it by name, another ad clearly makes a dig at “triple hops brewed” Miller Lite, by declaring that Breckenridge’s Lucky U IPA is “seven-druple hopped.”

The brewer, which makes just 40,000 barrels a year, spent a measly $10,000 producing the parody campaign, called “Truth in Beervertising,” which includes four ads that will air on Denver Fox affiliate KDVR during local news and Broncos football games. The agency is Cultivator Advertising & Design, Denver.