You are here:
March 29, 2011Leave a commentSocial TV and TrendingBy Phil Tapia

But he didn’t stop there: He brashly predicted that not only will Coors Light surpass Anheuser-Busch’s Budweiser this year, but that Miller Lite will leave Bud in the dust in 2012.

A-B can try and stop it, he said, “but with brand Bud in decline and Coors Light heading for its seventh consecutive year of domestic volume and share growth, that would be like, well, trying to stop a train.”
Fighting words, for sure, intended to stoke competitive fire at the spring pep-rally-like convention for distributors heading into the all-important summer beer-selling months. The event, attended by some 4,000 people, included guest appearances by Dallas Cowboys owner Jerry Jones, up-and-coming Nascar driver Brad Keselowski and hip-hop artist Ice Cube, who will appear in ads for Coors Light this year, part of MillerCoors’ pledge to increase marketing spending by $50 million this year. In 2010, MillerCoors spent $396 million in measured media on its brands, down from $419 million the year before, according to Kantar Media.
But rhetoric aside, can the Silver Bullet really rocket past the King of Beers this year? Analysts said the odds are better than good. “Coors Light once again is the shining knight in silver armor so far in 2011,” Harry Schumacher, editor of Beer Business Daily, recently wrote. “If Coors Light continues this trajectory, expect it to surpass Budweiser this year as the No. 2 beer brand.” Coors Light ended 2010 with a 8.5% market share of all beer shipments, closing in on Bud’s 8.7% share, according to Beer Marketer’s Insights. Bud Light has 19.1% share, and Miller Lite is in fourth place with a 7.5% share. 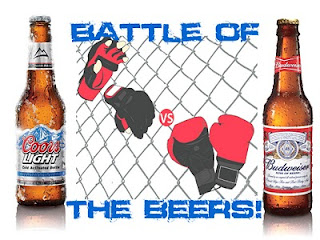 If Coors Light makes the move, the story won’t be so much about the brand’s rise as Budweiser’s big drop. Coors Light, which largely bucked sluggish beer trends brought on by high jobless rates among blue-collar drinkers, was a full share point behind Bud at the end of 2009. Its shipments increased 1.1% in 2010 to more than 18 million barrels, while Bud shipments fell 7.3% to 18.5 million barrels, according to Beer Marketer’s Insights.

“We don’t say it’s a slam-dunk” that Coors Light will pass Bud, “because things can happen,” said Beer Marketer’s Insights President Benj Steinman. But “the chances are very good considering the long-running decline of Budweiser and the growth in recent years of Coors Light.”

That growth was powered by its “world’s most refreshing beer” message carried out through gimmicks such as cold-activated cans and bottles on which the mountains turn blue when the beer is cold. This year, it introduces a new “super-cold” indicator, in which a bar on the can turns blue when the beer reaches a near-frozen state.

Budweiser, meantime, has struggled to find a message. In 2009 the brand moved away from its 2-year-old “Great American Lager” platform that emphasized brewing process and quality in favor of the “It’s What We Do,” ads that sought to play off the beer’s long-running presence in the American psyche. But the effort failed to halt the brand’s two-decades-plus sales decline. Anheuser-Busch changed course again late last year, hiring independent agency Anomaly for an ad campaign called “Grab Some Buds,” which seeks to reach out to younger drinkers with music-filled spots featuring scenes of cookouts, baseball, rock concerts and a young couple kissing at a bar.Ice Cube will appear in ads by Chicago-based multicultural agency Commonground, in which he stares down Coors Light bottles in a battle of who’s colder. The spots hold promise of crossover appeal, judging by the spirited reaction last week by the overwhelmingly white, middle-age audience of distributors, who gave most of MillerCoors’ other new creative only polite applause. (The agency of record for Coors Light is DraftFCB, which will continue to pump out other ads for the brand.) 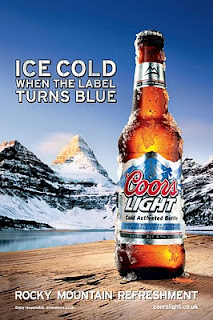 Maureen Ogle, author of “Ambitious Brew: The Story of American Beer,” said the brewer needs to pick one message and stick with it: “They just need to make up their minds on what they are doing.” She also suggested competition is hurting A-B. It is “just being hit on too many sides by too many appealing alternatives,” such as craft beers.

In a recent earnings call, executives said they were able to slow Bud’s decline to “low-single digits,” compared with the “mid-to-high single digits” decline of previous years. “Brand health metrics … went up for Budweiser after many years of being sideways,” said Carlos Brito, CEO for global parent Anheuser-Busch InBev. A-B executives did not respond to a request for comment for this story.

Coors Light will lose one asset this year that arguably helped its ascent — its deal with the NFL as the official beer sponsor. The pact terminated at the end of this season and now belongs to A-B, thanks to a six-year deal worth an estimated $50 million a year for Bud Light.

As for Miller Lite, the brewer will continue its “Man Up” campaign by DraftFCB, which positions the brand as the light beer with the most taste and mocks men who choose other brands.

At retail, consumers who buy Miller Lite products can earn “taste points” on a website, redeemable for prizes. Armed with iPads, swimsuit-clad female Lite Guards will be deployed to bars to encourage guys to become fans of MillerCoors Facebook pages.