You are here:
March 3, 2014Leave a commentSocial TV and Trending, UncategorizedBy Phil Tapia

The 86th Academy Awards, hosted by Ellen DeGeneres, will be held starting at 5:30 p.m. Pacific on March 2 at the Dolby Theatre in Hollywood. I’ve waited all year to see the 2014 Oscar battle to come to a conclusion and witness which directors, actors, and technical artists are rewarded by their Hollywood peers for having done great work in 2013. Interesting enough, I got bored in past years and honestly disagreed with Best Picture winners like Argo last year, or The Artist in 2012. I personally thought “Lincoln” should have won last year and still have not seen “the artist” to this day. Sorry but I have no interest in a silent film…  Needless to say, Hollywood over the years has had some great times and many boring times, but 2013 was one of the best times in recent history for movies. Many intriguing films were release “on-demand tv” over the past several weeks, and almost all nominees were classics, it’s tough to say which work of art will take home Oscars.

Many of the stars in the running for the golden prize of the 86th annual academy awards lined up outside the Dolby Theatre knowing the stakes are high. Oscar Sunday is the night where actors and actresses will know they have finally made it when taking home that well deserved Oscar!  “12 Years a Slave,” “American Hustle,” “Captain Phillips,” “Dallas Buyers Club,” “Gravity,” “Her,” “Nebraska,” “Philomena” and “The Wolf of Wall Street” were rained with honors as the 2014 Best picture, actor, actress, directors etc. when Oscar nominations were announced on Jan. 16. “American Hustle” along with “Gravity” we’re the leaders racking in 10 nominations each, with both films also earning director nods. Following by one, “12 Years a Slave” received nine nominations.  “Gravity” and “American Hustle” were thought to be the front-runner, but “12 Years a Slave” does have recent history on its side. Looking back at the last four years, “The Hurt Locker” beat “Avatar,” “The King’s Speech” trounced “Inception,” “The Artist” bested “Hugo,” and “Argo” won over “Life of Pi.” 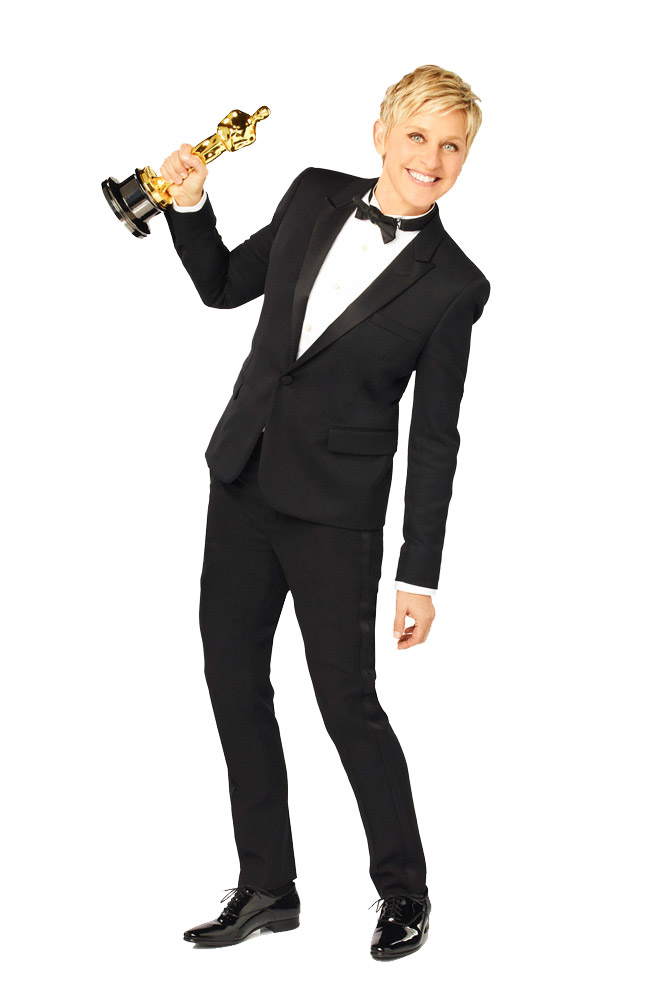 Ellen DeGeneres kicked off the 86th Annual Academy awards with laughs! She came right out of the gate and nailed it with her good-natured humor! The opening monologue was fantastic giving mention to Steve McQueen’s “12 Years a Slave,” joking that there are two possibilities for the night: “Possibility number one: ’12 Years A Slave’ wins Best Picture. Possibility number two: you’re all racists.” Or On Jennifer Lawrence’s tripping: “If you win tonight, I think we should bring you the Oscar.” One that made Jonah Hill laugh in delight when DeGeneres said, “in the nudity-filled Wolf of Wall Street, You showed us something in that film I have not seen in a very, very long time,” then cheekily added, “Get it?” With Ellen as the host, Oscars went from a B- (2013) with Seth MacFarlane last year to an A+ at the least!

My favorite part is when DeGeneres got Oscars’ online audience in on the fun by sharing a show-time selfie. 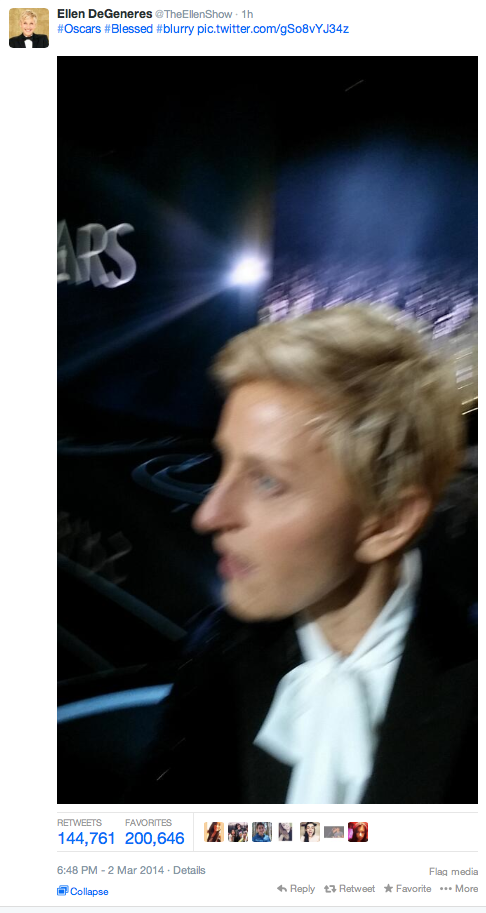 According to ABC News – “People want to see Ellen, they are excited to see her,” said Yahoo! TV editor Maggie Furlong. “She\’s a host who people let into their living rooms every day. Her show has been very good training for this.”

Her first time hosting the Oscars, DeGeneres was widely praised. The only complaint was that there wasn’t enough of her. But DeGeneres, now 56, wasn’t exactly eager to take the gig for a second time.

Ellen said, “I really thought, ‘Why do I want to add that to my plate? I’ve done it before, and it\’s scary as hell,” she told The New York Times in January. “If you do great, the reaction is that you were good. Not great — good. If you don’t do well, they just tear you apart, and they never let you forget it.” “It’s a tough audience,” she added. “It’s people who are jaded. To try to entertain them and make them laugh and make them relax and make them feel good is a challenge.”

So why, with everything in her life going so smoothly, host the Oscars now? “I thought why not challenge myself? I’m comfortable right now and it’s never good to be comfortable as a performer,” she told People recently. “Hosting the Oscars is pretty much the scariest thing you can do. To me, this is right up there with bungee jumping!” 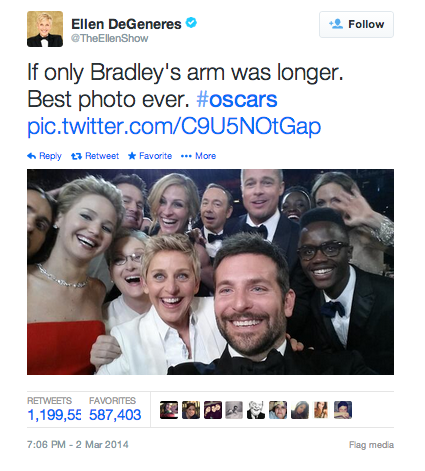 First Ellen DeGeneres tweeted this amazingly blurry selfie (above) from the Oscar stage. Then, she upped the ante by getting Meryl Streep, Julia Roberts, Bradley Cooper, Jennifer Lawrence, Brad Pitt, Angelina Jolie and more of the biggest stars on earth together for this truly incredible photo. She let Streep press the send button to Twitter, who exclaimed, “I’ve never tweeted before!”

Ellen’s attempt to make this the most retweeted photo of all time. Later she claimed to have broke twitter.

Based on an incredible true story of one man’s fight for survival and freedom. In the pre-Civil War United States, Solomon Northup, a free black man from upstate New York, is abducted and sold into slavery. Facing cruelty at the hands of a malevolent slave owner, as well as unexpected kindnesses, Solomon struggles not only to stay alive, but to retain his dignity. In the twelfth year of his unforgettable odyssey, Solomon’s chance meeting with a Canadian abolitionist will forever alter his life. The Oscar for best picture is well deserved. 12 Years A Slave is a phenomenal movie and a must watch. I personally think this film should be shown in every school in America.

Blanchett, 44, receives the Academy Award in the best actress category for “Blue Jasmine,” the Woody Allen film in which she stars as Jasmine, a high-society woman living in New York who falls from grace and has to move in with her sister in San Francisco. Winning the best actress award for the same role at January’s Golden Globes, Blanchett was effusive in her graciousness, but maintained a sense of humor about the awards ceremony.

Gravity was a phenomenal motion picture and very much deserved the many awards it received for one of the years best movies. Alfonso Cuarón wins the Oscar for best director for “Gravity.” Alfonso Cuarón Orozco is a Mexican film director, screenwriter, producer and editor best known for his films A Little Princess, Y Tu Mamá También, Harry Potter and the Prisoner of Azkaban, Children of Men, and now Gravity.

Nyong’o, 31, won the Oscar in her first feature film role, earning a thunderous standing ovation from the Hollywood audience. She beat fellow frontrunner Jennifer Lawrence’s portrayal of a loopy housewife in caper “American Hustle” in one of the most closely-watched Academy Award races this year. 12 Years a Slave‘s breakout star Lupita Nyong’o completed her victorious awards season run with her first Oscar on Sunday, March 2.

This is the Jared’s first win and nomination. The 42-year-old actor picked up the award for Best Performance byan Actor in a Supporting Role for his amazing work in the film Dallas Buyers Club. Jared’s performance was extraordinary and deserved his Oscar for his role as a transgender woman with HIV. Earlier in the evening, Jared walked the red carpet with his mom Constance, who was sitting next to him in the audience at the show. Upon receiving his Oscar was a phenomenal speech that will forever be remembered. At 42, Leto is the oldest actor in the category, beating out Jonah Hill, Michael Fassbender, Bradley Cooper, and Barkhad Abdi.

Tapia Advertising is a full service creative advertising – marketing agency based in Colorado Springs – Denver Colorado. Send us an email at phil@tapiaadvertising.com. Check back every week to say up to date with our blog.